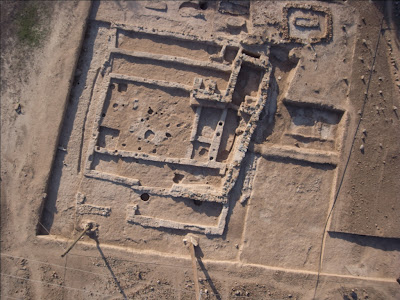 A French archaeological team in conjunction with the Fujairah Tourism and Antiquities Authority has released their most recent report (French, Arabic and English) on the ‘Excavations and Survey in the Masafi Area: Fourth Archeological Campaign’ (November-December 2011).

Here is their report:

The team working in Masafi under the supervision of A. Benoist is part of the French Archaeological Mission in the UAE directed by S. Mery and financed by the French Ministry of Foreign Affairs. The French Archaeological Mission in the UAE is engaged in a long term research program to study the evolution of human communities in the UAE, from the Neolithic period up until the beginning of Islam. To carry out these researches, the French Archaeological Mission includes several teams of specialists from CNRS, working on different periods: specialists of the Neolithic period have been working in Aqab (V. Harpentier), specialists of the Bronze Age have been working at Hili (S. Mery), researches are carried out in the emirate of Fujairah by a team more specialized in the Iron Age (A. Benoist) and excavations have been made at Mleiha by a team specialized in the Late Pre-Islamic Period (M. Mouton).

Regarding the Iron Age Period (Ca. 1300-300 BC), our aims are to study in a synthetic way different territories which have been occupied during this period, in order to put in evidence strategies of adaptation which were developed by human communities to take profit from their environment and to estimate the consequences generated by these strategies on the further development of societies. To carry out such a program of research, we try to select different geographic areas, characterized by different environments and resources and we study the organization and evolution of Iron Age territories located in these various geographical areas in order to establish local models of evolution and development. In a second time this data can help us to distinguish more clearly between environmental pressure and human choices and better characterize Iron Age societies.

The activity of the French Archaeological Mission in the Emirate of Fujairah is the result of a kind invitation by the Fujairah Tourism and Antiquities Authority who gently proposed to us to cooperate for studying pre-Islamic cultures. Traces of Iron Age occupation were first noticed in Masafi in 2003 during a brief visit made by the team. The site was reported to the department of Antiquities and measures for its protection were immediately taken.

Location and Composition of Masafi Territory

Masafi is located in a particular area including water springs, from where three wadis are circulating in different directions: Wadi Abadilah goes to the north west to Dibba, Wadi Ham crosses the mountains between Masafi and Fujairah and Wadi Siji links the region of Masafi to the one of Al Dhaid, along the western foothills. Thus, we probably are in one of the richest regions of the UAE for water. Traces of Iron Age occupation are known both at Dibba and Fujairah (Kalba) and Masafi appears also as a strategic location along the trade roads between western and eastern regions.

Thus, a program of research on the study of the Pre-Islamic occupation in Masafi was submitted by the French Archaeological Mission to the Fujairah Tourism and Antiquities Authority. It includes surveys and excavations in the part of Masafi belonging to the Fujairah emirate. With the authorization of the Department of Antiquities of Ras Al Khaimah, an exploration of some parts of Masafi belonging to the Ras Al Khaimah emirate was also planned.

During a first survey conducted in 2006-2007, the south-western part of Masafi was explored between the border of Ras Al Khaimah to the north and the road from Masafi to Al Dhaid to the south. Traces of Iron Age occupation extend in this area on a surface measuring around 600 x 200 m, including the western half of the Masafi Village, the eastern half of the palm tree gardens and to the north-west, a rocky hill which separated the cultivated area from the Wadi Abadilah. To the north, the Iron Age occupation seems to continue, although more sporadically inside the territory of Ras Al Khaimah. To the south the Iron Age occupation extends until the road leading from Masafi to Al Dhaid. An Islamic settlement is extending in the southern part of the Iron Age area, from the southern half of the palm gardens until the road.

Five archaeological areas were defined inside the area covered by the survey:

+ Excavations were made in 2006, 2007, 2009 and 2010 on a low terrace located to the west of the present village, next to the palm tree cultivation area. They allowed the discovery of three successive public buildings dated from the Iron Age II Period. This area was named Masafi-1. These three successive buildings were very similar in shape and their function probably was identical, but each one was characterized by distinctive techniques of construction.

+ At a distance of 300 m to the north-west of Masafi-1 a fortress could be located on a rocky hill. It forms the Masafi-2 area. The excavation of this large Iron Age II settlement began in 2010 and is still in progress.

+ In 2007, a trial trench carried out in a farm to the west of Masafi-1 revealed a third archaeological site, Masafi-3. It was excavated during the 2009 and 2010 seasons and could be interpreted as a temple, dating from the Iron Age II Period. It probably was functioning when the public buildings were used and was connected to them.

+ Masafi-4 is an area located on the eastern side of a rocky hill to the north of Masafi-2 in the territory of Ras Al Khaimah. It was only visited in 2010 and still needs to be mapped with the agreement of the Ras Al Khaimah authorities. Stone walls are visible on the slope of the hill and a huge quantity of pottery is present at the foot of the hill. It includes some Iron Age material but also a lot of Islamic pottery and several occupations might be represented there.

+ Finally Masafi-5 was discovered in 2010 and the surface remains were mapped during the present campaign. The site is a settlement extending on the northern slope of a rocky hill which has been partly bulldozed to the south. A first study of the remains and the associated material made during the present campaign suggests a Late Bronze Age dating.

The present campaign has allowed us to definitely date the border and the cut and cover section of the falaj from the Iron Age Period and to precisely study the evolution of this area. Further research will maybe help us to study the connection between this area, determine the chronology of the public buildings and find the location of the water sources during the period of occupation.

At the present point of research, the fortress appears as a structured construction, made owing to a plan which suggests a strong political organization. Its dating seems quite close to the one which we gave to the different public buildings of Masafi-1, although its abandonment might have been somewhat earlier than the abandonment of the Masafi-1 area (stone building C). There are in Masafi-1 several episodes of abrupt changes (the first and the second public buildings have burnt and have been replaced by buildings made in another type of construction material); one of these might be related to the Masafi-2 ‘big fire’. 14C dating and material studies are in course and we hope they will lead to a better chronology of Masafi evolution.

Several elements might explain the location of the fortress on the slope of the rocky hill, in an area which was a difficult location for a construction and more particularly for a regular construction:

+ One of them is the wish to leave to agriculture all the space located downwards to the country of areas located along the foothills. The agriculture space at Masafi was totally surrounded by mountains. It could be optimized through densification of agriculture but hardly protected.

+ Another reason was the necessity of protecting the area from the west along the opening of Wadi Siji.

Thanks to the Fujairah Tourism and Antiquities Authority for making this report and the photos available.

Some photos taken of the different Masafi sites can be seen in this photo album.

Image: A bird’s-eye view of the Masafi-1 site.