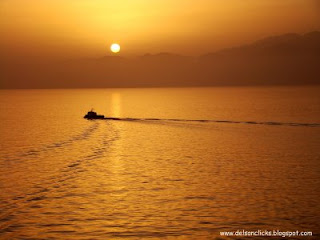 There are some times when Fujairah looks dusty and dirty and other times when it looks sensational.

Here is a photo of the Fujairah waters at sunset. It was taken by Delson Roche and posted on one of his web sites with the caption, “The last boat sails back to the docks at Fujairah.”

Check out Delson’s site at DelsonClicks and find the links to his other sites on which he has posted black and whites, photos of animals and another section devoted to flowers.

He is a terrific photographer and I am grateful to Delson for his permission to post this fine picture of Fujairah.

Image: “The last boat sails back to the docks at Fujairah.”

Monitoring Impact of Fujairah’s Growth on Health and Environment 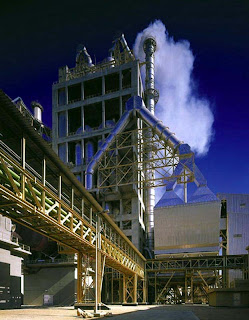 Cementing Fujairah Development
The announcement was made today that the Sharaf Group is setting up a cement factory in the town of Habhab, in the emirate of Fujairah, at a total cost of Dhs1billion.

This investment comes hot on the heels of a rash of new ventures being announced for Fujairah in the way of the:
Fujairah Business Park (Business Compound, The Market and Hotels)
Strengthening of Infrastructure
Oil Industry developments

Environmental & Health Costs?
One of the pleasing aspects of today’s announcement was when Mr. Rashid Hamdan Abdullah, the Director of the Municipality of Fujairah emphasized “that the directives of His Highness Sheikh Hamad bin Mohammad Al-Sharqi, member of the Supreme Council and the Governor of Fujairah focused on the need to abide strictly by all the factory conditions and environmental laws of the Federation of Environment Authority, and the laws of environment and safety for the sake of public health.”

Furthermore the Director highlighted that the location of the new factory in Habhab is at a safe distance and away from the nearest housing complexes.

Fujairah and Health Issues
There is significant anecdotal evidence to suggest that many newcomers to Fujairah find, especially in the first few weeks of arrival, that they and their family members get sore throats, stinging eyes and infection. Fujairah doctors and pharmacists corroborate these personal reports saying that the dust from the quarries and smoke from fires and factories contribute to a significant health risk, especially for those who already have respiratory problems. Cases have been reported whereby expats have developed asthma while living in Fujairah and have been told by local doctors that they are wise to return to their homeland to prevent a serious deterioration in their health.

Independent Monitoring Needed
Residents of Fujairah will be glad to observe the development of infrastructure, the upgrading of facilities and the expansion of industry and tourism. They will be heartened to learn that the Fujairah Municipality is insisting that new industries sign up and abide by conditions that will help preserve the environment and personal health.

It would provide greater peace of mind if the Fujairah Municipality would establish an independent monitoring of the way industry is impacting the land, sea and air, including the effect on personal health. Publicizing the existing measures and letting residents know of new monitoring and policing methods will be essential as Fujairah continues to develop.

Source: ‘Sharaf Group to Set Up a Cement Factory in Fujairah’, AMEInfo 27 March 2008.

Image: A cement factory on the Arabian Peninsula. 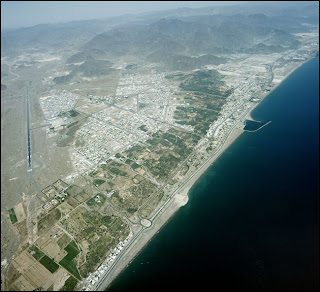 Fujairah Commercial Directions
In recent weeks some significant announcements have highlighted the key business directions for the emirate of Fujairah.

These announcements have included the development of cement plant, new oil and gas pipelines with expanding terminals and new hotels and resorts being opened.

Specific Projects
Earlier this month at the opening of the new headquarters of the Al Taif in Fujairah some new opportunities were announced:
* Tourism projects
* Industrial ventures including an aluminum plant (Dh300m) and a gypsum board factory (Dh45m).
* Business Projects including the establishment of the Fujairah Business Park (at Dh650m-750m a project consisting of two towers with offices, apartments, hotel rooms and shopping mall—this will be located next to the Al Bustan ballroom at Hamad bin Abdullah Street) and The Market (a Dh2bill investment involving housing facilities, business areas, and a shopping, entertainment and cultural complex).

Fujairah No Longer Overlooked
Khalid Kalban, Chairman of Al Taif Investment, which is a joint venture between Dubai Investments and Fujairah Investment Establishment (FIE), admitted that the emirate of Al Fujairah had largely been overlooked and investors stood to realise significant gains by seizing opportunities in Fujairah. He said. “While the UAE continues to grow, the business potential of smaller emirates such as Fujairah remains largely untapped.”

Image: “The emirate of Al Fujairah had largely been overlooked…”

Fujairah Being Readied for Growth 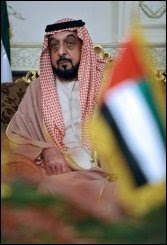 The massive network of trenches and drains across Fujairah at the moment is a response to the huge allocation of money by UAE President Sheikh Khalifa bin Zayed al-Nahayan to expand and strengthen the infrastructure for the growth of some of the smaller emirates in the UAE.

The funds will go towards setting up new towns and intercity highways as well as stormwater and sewage systems in the northern emirates, WAM said without identifying which emirates will benefit from the projects.

The United Arab Emirates comprise the wealthy emirate of Abu Dhabi, the country's capital, as well as the booming state of Dubai -- both of which are spending billions of dollars on their infrastructure.

Northern emirates, where the economy is growing at a much slower pace, include Ajman, Fujairah, Ras al-Khaimah, Sharjah and Umm al-Qaiwain.

Sheikh Khalifa is the ruler of Abu Dhabi. 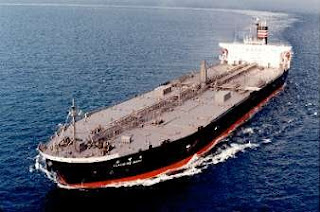 Oil on Fujairah Beaches Again
Another ‘oil spill’ has washed onto Fujairah beaches only three weeks since the last major ‘oil spill’.

The damage to the diving, hotel and tourist industries is colossal. With the regular and relentless oil spills on the UAE’s East Coast, people would be stupid to buy so called ‘fresh fish’ from the local markets unless they like it soused in crude oil. But the long term environmental damage makes these frequent ‘oil spills’ catastrophic.

Oil Spills or Oil Drains?
To speak of an ‘oil spill’ is to suggest that the act was accidental or unintentional e.g. ‘Oops! I’ve split coffee on my shirt’; ‘See if you can pour the juice into your glass without spilling it’.

We need to stop calling oil on the beaches an ‘oil spillage’ and start speaking of ship owners deliberately draining their oil slops into the sea. The shipping and oil industries are highly technological so the oil drains at sea are too frequent to call these accidental and unintentional.

Cleaning Process
Before oil tankers are reloaded with a fresh cargo of oil they must have their tanks cleaned. This cleaning takes place out at sea and it involves putting the remains of the old oil cargo into a ‘slop tank’ which is taken by a ‘slop carrier’ and put into a ‘slop farm’ near the port. The tank is cleaned with solvent so what is appearing on the Fujairah waters is often not oil alone but a mixture of old oil and solvent. This procedure takes time to do it properly and it costs money—currently between $500,000-$600,000 depending on the size of the vessel.

Low Fines and High Profits
It is therefore tempting for a sea captain to save half a million dollars by releasing the oil slops into the Fujairah waters during the inky darkness of the night. And with fines for oil spills currently at the level of only $100,000 it is a risk that some rogue ship owners think is worth taking.

In the fluctuating price climate of oil futures, time is of the essence so whatever a ship owner can do to minimize the amount of time anchored in the Fujairah waters can look very attractive. The issue is accentuated at this time when there is a shortage of oil tankers in the world.

Urgent Action Proposed
With 150-300 ships at any time out from Fujairah and with these numbers due to escalate it is getting increasingly difficult to identify the culprits under the present system.

Fujairah is already being called ‘the biggest bunkering port in the world’ and with new oil refineries, terminals and oil pipelines being built, it is urgent that something be done to stop the willful draining of oil slops into the ocean.

The fine for oil spills must be increased and must be to a level that is significantly higher than the cost of cleaning the tank and depositing the oil slops properly into the slop carrier.

Furthermore, a more effective policing mechanism must be instituted with more police boats on patrol and creating a climate of high vigilance.

This will cost money but with the bunkering business now worth billions of dollars it is proportional. Otherwise the significant oil revenue that is coming to the UAE will be at great expense to the tourism, diving and fishing industries. Most importantly is the need to safeguard the priceless environment on the UAE’s East Coast. 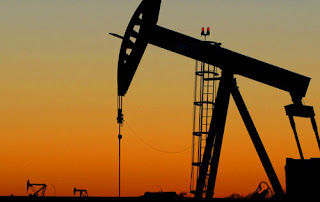 As oil topped the $100 per barrel mark, the Singapore-listed company Chemoil Energy announced that it will launch its marine fuel business in Fujairah this month (March) and will more than double the storage capacity within two years.

The Reuters article said:
“The foray into Fujairah will put it in direct competition with Vitol, which will soon start trading in a region dominated by a small group of Arab players and had already seen several large foreign firms fail in their attempts to cement a foothold in the market.”

Company chairman, Robert Bandy spoke of the attractiveness of the Fujairah location when saying:

“I think if you run the numbers, Fujairah is the largest fuel oil port in the world now... it’s outside the Strait of Hormuz, every oil tanker loading crude oil out of the Middle East will entertain that as a stopping point for fuel.” Bandy said.

Fujairah handles about 100 vessels at any given time for various marine services including re-fuelling, port data show.