'We Are One Nation'
This interview with His Highness, Sheikh Mohammed bin Rashid al Maktoum (25 June 2010), is important for understanding where Dubai is positioned following the global recession. It is also pertinent to understanding how Fujairah fits with other emirates into the United Arab Emirates.

Speaking not only as the Ruler of Dubai but the Prime Minister of the UAE, His Highness Sheikh Maktoum says:

‘It’s Not a Recession, it’s a Challenge’

More on Fujairah
This article and more information on Fujairah is posted on the Fujairah in Focus Facebook Page.

“…and it is culturally insensitive to ask an Emirati whether…” 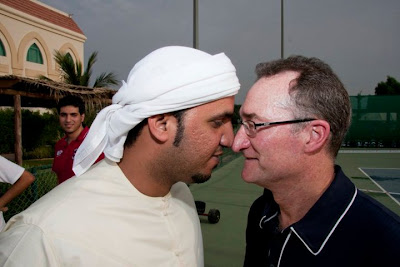 Welcome to Britain
New tips on extending a warm welcome to overseas visitors in the run up to the 2012 Olympics have been posted recently by VisitBritain, the national tourism agency.

Here’s a sample of the suggestions (read the article for explanations) to help the English to be more culturally aware:
* A smiling Japanese person is not necessarily happy…
* Be careful how you pour wine for an Argentinian…
* Avoid winking at someone from Hong Kong…
* Avoid physical contact when first meeting someone from India…
* Never call a Canadian an American…
* Avoid saying ‘’thank you’’ to a Chinese compliment…
* Do not take offence if an Australian makes a joke about ‘Poms’…

Arabs and Emiratis
Here are the pointers in the article relevant to welcoming Arabs and Emiratis:
“Remember Arabs are not used to being told what to do. Visitors from the United Arab Emirates can take great offence if you appear bossy. They appreciate being looked after by staff who have been trained to understand Arab culture. For example, it is culturally insensitive to ask an Emirati whether they want bacon with their eggs or to include a half bottle of wine with the table d’hote menu.”

Welcome to the Emirates
At this time of the year when many have recently arrived to become expats in the Emirates it is advisable to be refreshed in Emirati etiquette or simply ‘what goes on around here.’

Becoming Expert in Culture
Britain might have issued their cultural tips to raise their profile as a tourist-friendly nation but there are more important reasons for becoming adept at reading the local culture.

A series of highly publicized bloopers made by British tourists in the Emirates some time back raised alarm bells and scared tourists away from visiting the UAE. Even an article like this can induce the fear among expats about making a blunder and causing disrespect to the people of the land.

Things will be different living in a new country. If people don’t like the way things happen here they can go home. Encountering cultural differences will challenge our culture and question the way we do things and why we do them.

Living in another culture can be one of the greatest educators if we embrace the experience as a growing adventure.

Image: This looks like a cultural difference! Khalil Bin Mossa (Fujairah Media) and Ross Brown (Manager of the Fujairah Tennis and Country Club), greeting each other at the recent Maktoum Championships—Ramadan Tournament 2010.

This article is also posted on the Fujairah in Focus Facebook Page upon which many more articles and links are posted than on this blog.