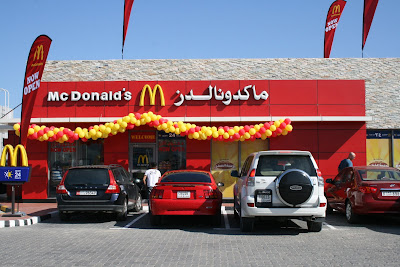 History was made yesterday and bedlam was created with the huge number of customers arriving at the first McDonald’s Restaurant to open in Fujairah.

Today at lunch time the drive-through was full but flowing freely. The restaurant seats were almost all taken and the place was buzzing. The counter area was congested with excited and hungry customers. There were children dragging along their parents and customers from many different nationalities were dining out today on the famous fast food.

Today is the first time the Fujairah restaurant will be opened for 24 hours a day service.

Finally Empowered
When I congratulated Mr. Rafic Fakih, General Manager of McDonald’s UAE, on the opening, he was relieved more than elated. He said:

“It took some time to get the electricity connected but now it is OK. Our store has been sitting there ready to go. When the electricity was switched on by the Fujairah Municipality it took us only 10-12 days to get ready for the opening.

Opening Rush
“Yesterday,” Mr. Rafih said, “There was a rush between 7pm and 11pm, especially with the drive-through. We brought in extra staff yesterday and a few more today because it was busier than we expected. It looks like the restaurant sitting there for one year waiting to be connected to the power did have the benefit of alerting Fujairah people to the existence of McDonald’s. We will have a rush for the first 1-2 weeks.”

Opening Special
In addition to the festive balloons, McDonald's Fujairah was offering a special discount (20%-30%) on its breakfast meals for the first couple of months after opening.

Future Fujairah Restaurants
Mr. Rafih said that McDonald’s had not yet decided on other restaurant locations in Fujairah. He said:

“We are discussing the possibility of opening in a Fujairah mall as well as establishing another stand-alone restaurant. Possibly in the next 2-3 weeks we shall make a decision.”

Take a Look
Some pictures of Fujairah McDonald’s in full swing are posted in this photo album.

This article is also posted on the Fujairah in Focus Facebook Page.

Image: “Today is the first time the Fujairah restaurant will be opened for 24 hours a day service.”