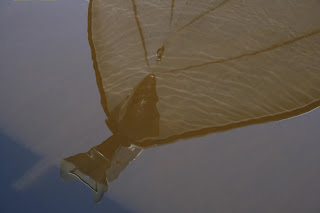 Oil
Emmanuelle Landais, in a Gulf News article today (11 January 2009) surveys the oil spills [accidental] and illegal dumping [intentional] that have been afflicting the Fujairah coastline.

A picture appears with the story showing a Qidfa fisherman walking along the two kilometer stretch of beach pondering the oil slick. The story is unclear as to whether there has been a fresh oil spillage this year but I have asked for clarification.

Algae
The red tide algae continues to have a devastating effect on the fishing industry and it appears to be more pronounced the further north (towards Dibba) you go.

On the Khor Kalba beaches recently the redness and the smell have not been so apparent but a tourist visiting Khor Fakkan recently wrote me a letter asking about the color of the water and wondering whether it was safe to swim. It would be good to hear an answer on this from microbiologists and health specialists. I have been swimming off the east coast recently but I didn’t put my head under.

Another continuing issue with red tide algae is the extent to which it is affecting the fish and how safe it is to buy the fish at the local fish markets. Some vendors were earlier fined for selling fish that had washed up on the beach, obviously victims of the oxygen deficit caused by the algae.

As with oil, the extent of the algae problem depends on which beach you are looking at and on what day you look.

Algae Persists
Read this most recent report by a blogger who sailed around the Fujairah and Omani coasts and posted this report on 11 January 2009:

“It was good to see some of our surroundings - Dibba is only a few hours away so definitely could be a weekend get-away. What was sobering was seeing the red tide - or algae bloom. Apparently it happens every year for only two weeks or so. But the red tide arrived in September this year and is still there. The algae blocks the oxygen for up to five metres from the surface so fish are dying. It also blocks the sunlight so the coral reefs are dying - a diver from Emirates Diving said 98 percent (!) of the reefs around Dibba are dead. From what I can gather the algae bloom occurs naturally from nutrients welling up from the cold sea currents but can also be caused by man made factors such as fertilizers or other contaminates. What is truly amazing is we had no idea that this was happening. We heard earlier in the year that thousands of fish had died in Fujairah but everyone we talked to said they heard the red tide was gone. I can tell you driving along both coasts we could see the purplish tinge of the water. The fishing villages in Oman haven't sent boats out in months. We saw only a few spots where the water was clear. We snorkeled through bands of reddish purple water where you could not see a thing as it washed over the reef. Very, very scary. Apparently the right condition of waves and wind will make the red tide disappear so let's hope it goes away soon.”

Swimmers, divers, fishermen and hotel are all being affected by the oil and algae on the UAE’s east coast.

Got a report to share on the oil and algae you have spotted recently on the UAE’s east coast?

Image: The water around the Fujairah Marina last week looked ominously red and brown. Is this the result of oil from the motors of boats, the presence of red tide algae or an inexplicable cocktail?

Why is everyone hoping that nature (rain, winds and so on) will deal with algae by itself? Yet, it is human activity that caused this huge catastrophe along the East Coast, so it is human responsibility to cope with it. It is naive to believe that one day algae will go away without men helping the nature because of the phenomenon’s large scale affection.