When Your Number is Up in Fujairah 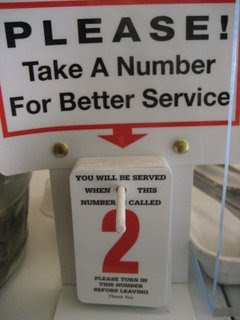 I have written (perhaps as therapy) about the propensity for queue jumping in Fujairah and it looks like many companies are doing something to deal with customers who get out of line.

Companies like Etisalat have had for many years a system whereby people take a number that in the fullness of time, appears in lights (in both Arabic and English) and is announced by a beeping sound.

The HSBC bank in Fujairah has recently introduced this similar system of ‘first come first served’. One of the customer service staff at HSBC said that older Emirati clients were taking a long time to get used to the new system. I said, “Is that because the numbers appear only in English and not in Arabic?” She said, “No. It’s because many of the older people cannot read.”

This is a good reminder of how a large proportion of the national citizens of Fujairah are still very much living in an oral world.

I will miss those queues that are 20 people wide and one person deep.....