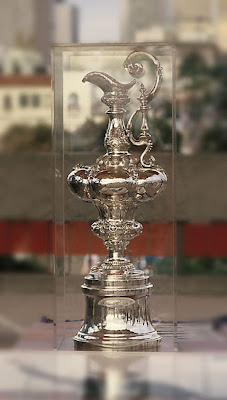 Old Race
According to Wikipedia, the America’s Cup is the most prestigious regatta and match race in the sport of sailing.

Old Cup
The cup is the oldest active trophy in international sport, predating the Modern Olympics by 45 years.

New Venue
The 33rd racing of the America’s Cup yacht race was widely expected to be held in Valencia but history was made with the announcement today that the competition would be held in the little known emirate of Ras al-Khaimah, the United Arab Emirates.

New Blog
An old competition holding an historic regatta in the young country of the Emirates warrants the establishment of a site that has America’s Cup news from a UAE perspective.

Blog writer, Geoff Pound, is based in the United Arab Emirates, but he hails from New Zealand which has featured prominently in the recent history of the America’s Cup. As a young person he had an undistinguished career as a yachtsman with the Howick Yacht club in Auckland, the ‘City of Sails’. His career started in P Class yacht racing but unfortunately, he made his mark more under the water than above.

Other Sites
His other blog sites which have a UAE flavor are:
Experiencing the Emirates: Random reflections on everyday life in the Emirates.

Fujairah in Focus: News, views and issues from Fujairah, UAE.

New Site
Here is the link to America’s Cup in the UAE.

Advertising
Do contact me for information about advertising on these sites.

Image: The America’s Cup—or affectionately known as the ‘Auld Mug’.