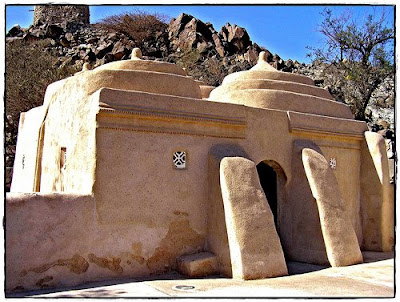 The Al Bidyah Mosque is the oldest worship place in the United Arab Emirates and is a popular stopping off place for residents and tourists.

Women as well as men can visit although it is advisable for women to take a scarf or similar covering for the head and shoulders.

Take some time to see the castle above the mosque. This is an important archaeological site in the UAE.

Construction
Al Bidyah Mosque is built of stone and mud bricks and is coated in many layers of whitewashed plaster.

Architecturally, Al Bidya Mosque is unique in the UAE and the engineering features are considered a major accomplishment for the period of construction. Its distinctive roof with its four pointed domes is supported by an internal pillar and is unusual for religious architecture in the region.

The prayer has a small mihrab (the niche in the wall that indicates the direction of Mecca) and a simple minbar (the pulpit which is usually situated to the right of the mihrab and consists of a raised platform reached by a set of steps).

History
According to a radiocarbon analysis, the date of the construction of the Al Bidyah Mosque is thought to be as early as 1446 AD. The mosque is named after the town in which it is located and it is also known as the Ottoman Mosque, after the man who built it.

Location
Al Bidya (spelt Al Badiyah on the map below) is approximately 35 kms north from Fujairah city before one gets to Fujairah’s Al Aqqah hotels and beach resorts.

Check it Out
Check out the new site America’s Cup in the UAE.