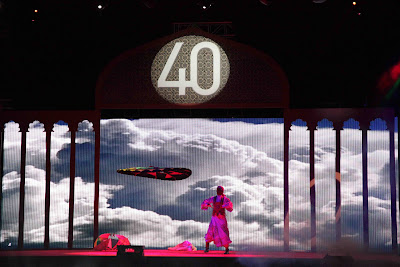 G-Force Arts was hired by the Fujairah Municipality to produce and stage an event for its Sixth Family Festival that was timed as a Fujairah celebration of the UAE 40th National Day celebration.

The event on Tuesday 29 November 2011, which will be repeated on Wednesday 30 November at 7.30pm on the Fujairah Corniche at the bottom of the main street, did not disappoint.

The Dubai-based events company prides itself on their goal of delivering a ‘flawless execution’ and the evening appeared to go off without a hitch.

The event commenced with a group of UAE women doing a stylish hair dance, then continued with a series of dances to rhythmic music performed by troupes from countries such as Lebanon, Palestine, each decked out in their traditional dress.

The performance included a modernized version of a whirling dervish from Egypt and Russian performers dancing with rows of lights.

The rear of the stage was lit with changing, colourful scenes while at the front of the stage there were smoke machines releasing their coloured puffs and cylinders that emitted thunderous flames.

A couple of the musical performances were enhanced with laser lighting that lit up the grassy park on which hundreds of people sat and relished the experience.

The evening concluded with a long and sparkling fireworks display arising from a barge in the water. The lights and explosions could be heard all over Fujairah.

G-Force Arts put on a spectacular and enjoyable outdoor event that was enjoyed by an appreciative multicultural audience.

Take a picnic dinner and get down to the corniche early tonight (Wednesday) to secure a good space for viewing the show and the fireworks (to the right of the stage looking from the road). Watch where you park your car. The corniche road was congested for a long time after the fireworks display.

G-Force Arts is professional and precise. They put on an event that all the family will enjoy.

Mabrook! Congratulations to the Fujairah Municipality for hosting an event that was well done, a delight to all the senses and an appropriate celebration for people enthusiastically marking 40 years of UAE nationhood.

Some photos of the G-Force Arts sound and light dance show, plus the fireworks, are posted in this photo album.