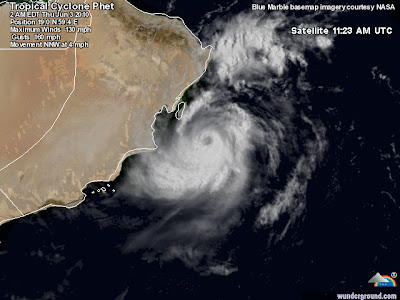 Oman’s Weather Warning
A powerful storm over the Arabian Sea has now intensified into a tropical cyclone named Cyclone Phet and is due to hit Oman’s east coast on Thursday.

Caution Advised In UAE
The National Centre of Meteorology and Seismology (Abu Dhabi) sounded an alert in the UAE concerning Cyclone Phet, whose peripheral effects might affect the country by Thursday evening (3 June 2010).

The centre cautioned fishermen and beachgoers to stay away as the cyclone could turn the sea rough. The marine warning is valid till Saturday, the centre said.

Sea waves in different coastal regions of the country could rise to eight feet and strong winds could kick up dust and reduce visibility significantly, particularly in the eastern parts of the country.

Rescue Team on Alert in Fujairah
A rescue team has been put on alert in the emirate of Fujairah as a precautionary measure to face the tropical cyclone ‘Phet’ as weathermen predicted that it may pass by the east coastline.

Latest Alert via Gulf News & WAM
A rescue team was ordered by Lieutenant General Saif Bin Zayed Al Nahyan, Deputy Prime Minister and Minister of Interior, to be present in Fujairah as a precautionary measure against tropical cyclone Phet.

Colonel Mohammad Abdullah Nusaib Al Nuaimi, Deputy Director of Emergencies and General Safety at the Abu Dhabi Police Department, said a 57-member team is on hand as a precautionary measure.

A joint operation room has been set up in coordination with Fujairah Police and other relevant departments in the country.

Warning for UAE Residents
The National Centre for Meteorology and Seismology (NCMS) warned of high tides and strong winds in the next 48 hours.

Waves are expected to reach a height of 7 or 9 feet and up to 13 feet on Friday afternoon, with a slight possibility of rainfall stretching from the eastern coast into the southern coast.

Wind speed up to 30 knots an hour are also expected on the eastern coast.

The centre urged residents of coastal areas to refrain from sailing and swimming in the sea for the next two days.

The centre also warned boats and ship of high tides and winds, which may cause accidents.

Visibility will also dip due to dusty winds.