Taking a Taxi in and from Fujairah 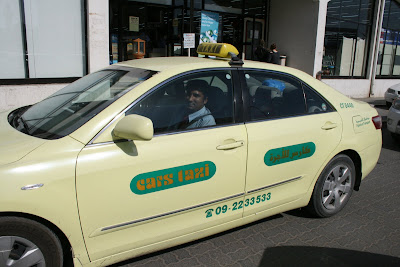 Efficient and Safe
Sometimes questions from newcomers are asked about taking a taxi in Fujairah and occasionally stories surface from tourists about being taken by the driver on what seems to be an intentionally long route to reach their destination.

Fortunately these stories are rare and generally the taxi service in Fujairah operates efficiently and safely for driver and passengers alike.

Fujairah taxi fares are among the cheapest in the Emirates and do not incur the massive charges that Abu Dhabi taxis have applied when people are riding to big events.

Information Inside
The following notice should be posted on a sign window inside each of the gold coloured taxis:

The Taxi Service is regulated by the Fujairah Transport Corporation

Taxi Fare Chart
The fares are governed by meter in each taxi.
The starting fare is Dh3 [the cost is Dh10 in Sharjah and Dubai] and a Minimum Taxi Fare is Dh5 for a short distance in Fujairah.

The starting fare is Dh10 to go to other emirates from Fujairah.

For safety fasten your safety belts

Trip is free of charge if meter not operated.

Any road tolls are to be borne by passenger

Your children are safer if riding in the rear seat

Don’t forget the Taxi No. and ask for a receipt

Further
1. The poster states Don’t forget the Taxi No. in case you need to make a complaint.

2. If you are feeling vulnerable, note down the number on the number plate of the car before you get in, write down the taxi number when you get in (also written on the back and side near the back doors) and have the booking and complaints phone numbers added to the directory of your mobile phone.

3. In Fujairah you only have to pay the amount stated on the meter which is the Start fare added to the rate clocked up by the distance. This is different from some Indian cities where you are charged double what the meter says, presumably so the driver is given the rupees to get back to the starting point.

4. If your taxi goes through the emirate of Sharjah (as happens to and from the Dubai International Airport) there is an extra 25 AED or so for travelling through Sharjah roads.

5. The majority of the 700 taxi drivers in Fujairah come from Pakistan (speaking Urdu and Pasto) or Bangladesh (speaking Bengali). Most have a basic knowledge of English and if they have been here for a while they have a basic working of Arabic.

In case you are not making yourself understood here are some basic phrases in Arabic that you might need:

You rarely need to ask Fujairah taxi drivers to speed up. Before speed cameras were installed, taxis on the road to Dubai would sometimes hit 160kph or more (in a 120kph zone) so the phrase most often needed (with emphasis and a feeling of concern) is Shway! Shway! Slowly. Slowly.

(Turn) Left is Yasser as in Yasser Arafat.

(Turn) Right is Yamine as in Ya Mean old thing.

6. Most of the taxi drivers in Fujairah are Muslims who seek to pray five times a day. If you are travelling a long distance (e.g. Fujairah to Dubai) and it happens to be during a prayer time don’t be alarmed if the driver asks you if it is OK for him to stop (for salah—prayer) at a mosque or on the side of the road. You can say Yes or No depending on how pressing it is for you to get to your destination.

7. If you are living in Fujairah for a while it is good to get your own taxi driver or more than one because your regular driver might be out of the emirate when you need to travel. Ask around for recommendations.

If you’re happy with the service ask the driver for his business card (many of them have cards) or for his phone number and name. This is handy especially when you need to get a taxi ride to the airport early in the morning or late at night.

This article is also posted on the Fujairah in Focus Facebook Page.

Image: A gold-coloured Fujairah taxi outside Choitram's Supermarket in the main street.