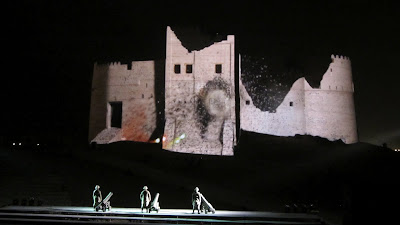 The evening commenced with opening speeches by His Excellency, Mohammad Saeed Al Dhanhani (Festival Chairman) and Mr. Tobias Biancone (Director General of the International Theatre Institute) that paid tribute to His Highness, Sheikh Hamad bin Mohammed Al Sharqi, Supreme Council Member and Ruler of Fujairah, and noted the tremendous support that he has given to the promotion of culture and drama in the emirate.

His Excellency Mohamed Saif Al Afkham (Festival Director and Secretary-General of ITI) gave a speech in which he recognized the contribution of Peter Brook. It included video footage of the delegation that visited Peter Brook in Paris and his appreciation in receiving the first Fujairah award in theatre excellence.

The Opening in Numbers

The newly created outdoor theatre had a capacity of 1,000 people, each of whom would have got a great view of the stage, the fort and the Hajar Mountains. There were 300 technicians on location during the ceremony and 20 international experts in light and sound. 50 musicians contributed to the music in the opening ceremony.

‘The World Passes Through Here’

The main event was a nourishing ‘light dramatic and artistic meal’ written by local playwright and poet, Mohammad Saeed Al Dhanhani, narrated by Asaad Khalifa and directed by Eyad Al Khzouz. Music was composed by Walid Al Hashim and the dance was performed by the Ornina Group for Theatrical Dance.

It presented the history of the region down through the centuries with explorers arriving by ship, the chapters of conflict and the local characters shaped by the mountains and the sea. It concluded by featuring the formation of the UAE and the development of Emirati culture with a large number of Emirati men emerging from the fort and doing the youla dance while the dance troupe moved across the stage.

The dancers were colourful and bright, the sound effects dramatic and the visual images screened on the fort’s façade created impact and tension.

Last night’s event was an opportunity to welcome international guests and relay something of Fujairah’s history identity and current cultural contribution. Mohammad Saeed Al Dhanhani and the dancers, musicians and technicians took full advantage of the opportunity and did the emirate proud.

The evening concluded with the ubiquitous fireworks display that punctuated the sky and got the festival off to a rip-roaring start.

Some photos from the Opening Ceremony can be seen in this photo album.

More Fujairah news, resources and photos are posted in the Fujairah in Focus Facebook Page.