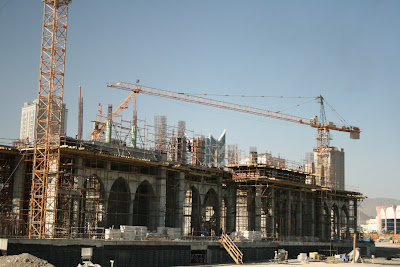 The foundational phase is complete and the walls and infrastructure are fast appearing on the Sheikh Zayed Mosque in , UAE.

At the outset the builders said it would take 800 days for the mosque to be up and open.

This is what it looked like at the 20 day mark.

Check out the progress at the 130 day mark.

Further pictures have been added to this photo album at the 284 day mark (1 April 2011) when one third of the allotted construction time has been reached.

While one construction web site states that the mosque will be finished by December 2011 the construction company is stating the completion date as August 2012.

The new mosque will certainly change the skyline of the city says UAE journalist, Anna Zacharias, in her December 2010 article in The National. Some residents, however, are bemoaning the fact that the structure will not be so awesome as it will be overshadowed by the row of skyscrapers and hotels that will surround it.

For certain, the ‘cathedral’ mosque will stand in stark contrast to the small, functional mosques that dot every neighborhood in the emirate.

From the number of visits to this Google Map to check the precise location, it appears that the Sheikh Zayed Mosque in is attracting lots of attention.

Check Out the Progress of Fujairah’s New Mosque, FIF, 28 October 2010.

This article is also posted on the Facebook Page—Fujairah in Focus.