Fujairah Celebrates Bread With the World 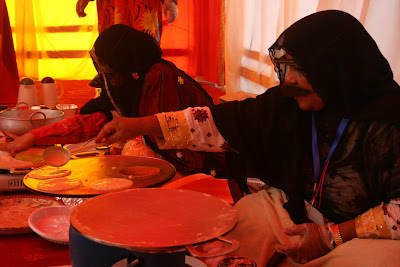 The celebration of bread got off to a colorful and tasty start this morning—the first of two mornings (Wednesday and Thursday).

In a tent behind the main Municipality building, representatives of the Public Health Department created a display of bread with most of the Fujairah bakeries taking a stall to showcase their bread.

Three Emirati women were cooking traditional bread on a hot plate and offering it to people to taste and enjoy. One man said, as he munched on this thin bread that had just come off the plate, “In the 1960s and 1970s this was the only bread we had. We did not have the great variety of bread that we can buy in bakeries and shops today.”

Already the display of bread was triggering the memories of what used to be and it was apparent how the diversity of bread has emerged in tandem with the rich mix of culture in Fujairah.

Mohammed Saif Afkham, the Director of the Municipality, visited the exhibition with his deputy and a number of representatives. He officially opened the proceedings, encouraged the department organizing the event, thanked people from the Fujairah bakeries for their participation, tasted the bread that was being baked and joined in the photo opportunities.

Celebrating With the World

Mr. Afkham said it was important for Fujairah and the UAE to be joining with other countries for World Bread Day this week. It unites us with people around the world but it also highlights our distinctive bread and bakery culture.

He said it was a good opportunity to talk about the ingredients that promote good living. He picked up a canister of potassium bromide and said it was banned in the UAE but health departments around the world have been campaigning against its use in cooking and its risk to public health.

The bread tent opens again on Thursday. Check out the programme at this link and get along for a tasting.

A big thanks to the Public Health Department of the Fujairah Municipality for staging this World Bread Day event in our emirate!

Check out some of the sights at the Fujairah bread festival from the first morning by following this link.