Latest Photos and Report on Sheikh Zayed Mosque in Fujairah 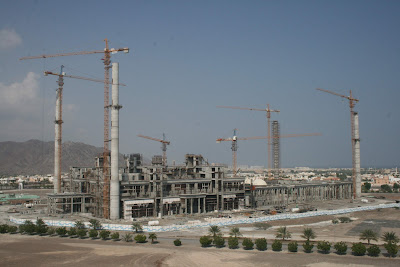 Engineer Mohammed Saif Al Afkam, Director of the Fujairah Municipality, said this week (26 October 2011) that the building of the Sheikh Zayed Mosque was on schedule or in advance of schedule.

At the outset (May 2010), the construction company said it would take 800 days to complete.

This construction of the largest building in Fujairah is gradually changing the city skyline.

Mr. Afkam said the new Fujairah mosque will be like the Sheikh Zayed mosque in Abu Dhabi, where anyone can visit and sessions are scheduled to encourage awareness.

The mosque is expected to be a significant place of worship and gathering. It will have a capacity for 28,000 people.

Upon completion, the emirate of Fujairah will have the second largest mosque in the United Arab Emirates and this will undoubtedly be one of the most popular places for tourists to visit.

Fujairah is also home to the oldest functioning mosque in the Emirates, located in the town of Al Bidyah.

Check out Fujairah’s Sheikh Zayed Mosque on Google Maps. Since this map was created in June 2010 more than 8,000 people have had a bird’s-eye look at the area of the mosque in relation to the city.

The latest photos (26 October 2011) of the Sheikh Zayed Mosque in Fujairah are in this photo album.

Check out the Progress of Fujairah’s New Mosque, FIF, 28 October 2011.

More Fujairah news updates, resources and photos about Fujairah are posted on the Fujairah in Focus Facebook Page.

Image: A photo taken this week of the Sheikh Zayed Mosque in Fujairah.