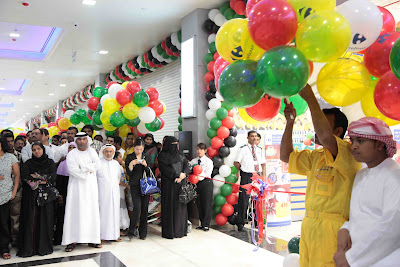 This morning (15 December 2011) at 10.30am the doors opened for business at the first Carrefour in Fujairah, located within the new Century Mall between the bottom end of Kuwait Rd (bypass road) and Al Faseel Rd that runs parallel with the beach.

Crowds of people gathered for the start that was advertised for 10am. Loud music provided the rhythm for a dozen Emiratis doing the youla dance at the entrance to the new store.

Many must have taken the morning off work to be at the opening!!

Arabic coffee was served to refresh and give an atmosphere of hospitality.

A coloured ribbon was placed across the entrance but when it was cut there were no speeches, only the crush of bargain hunters surging toward the door.

The man giving out the brochure with all the ‘Festive Feasts at Low, Low Prices’ was besieged.

After a few minutes it was difficult to move. Many went straight for the electronic goods department and in a few minutes people were wheeling their trolleys to the checkout laden with a new TV, a computer, an iPad or some computer games.

The staff appeared overwhelmed. The entertainment music made it difficult for anyone to be heard but it was a festive occasion and Fujairah residents seemed delighted to welcome Carrefour to their emirate.

Some photos of the gathering, the opening and the store are in this photo album and also some photos taken of the other shops in the first floor, all of which are to be ‘Opening Shortly’.

The escalators were blocked off and people denied access to the 2nd floor.

Congratulations to the manager and staff of Carrefour in Fujairah upon the opening of the first Carrefour in the emirate.

More Fujairah news, information, resources and photos are posted on the Fujairah in Focus Facebook Page.