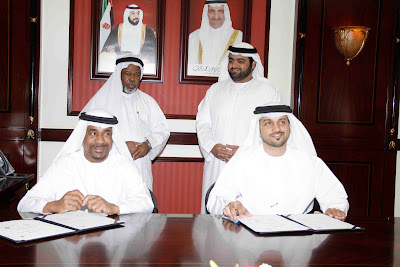 In the presence of His Highness, Sheikh Mohammad bin Hamad Al Sharqi, Crown Prince of Fujairah, the Ministry of Culture, Youth & Community Development and the Fujairah Crown Prince Award signed a Memorandum of Understanding (MOU) with the aim of developing cooperation between them to strengthen national identity, instill patriotism and introduce the new generations to the non-material heritage, which achieves the strategic goals of the Federal Government of the United Arab Emirates and serves both parties.

The memorandum was signed at the Fujairah Crown Prince’s Office in Fujairah by Musabeh Al Mesmari, Assistant Supervisor of the Crown Prince Award and Abdulla Al Nuaimi, Director of the Coordination and Initiatives Department at the Ministry of Culture, Youth and Community Development.

The signing was in the presence of H.E. Bilal Al Budour, Assistant Undersecretary for Culture and Art on behalf of the Ministry, and a number of Directors and Heads of Departments at the Ministry and the Crown Prince Office, in addition to Ahmad Al Dhanhani, Head of the Heritage Department.

For his part, H.E. Bilal Al Budour praised the leading role of H.H. Sheikh Mohammad bin Hamad Al Sharqi, Crown Prince of Fujairah, in the cultural sector in the Emirate of Fujairah, and his hard work and continuous support for culture and heritage in all fields.

He also praised the role that the Fujairah Crown Prince Award plays in maintaining and promoting national identity, introducing non-material heritage and reinforcing the originality that distinguishes the cultural heritage of the United Arab Emirates.

Al Budour stated during the signing that the Ministry believes that the cultural heritage is a human legacy and keeping it requires the combined efforts of all government and private institutions. That is why the Ministry of Culture, Youth & Community Development is devoted, within its strategic directions, to support and cooperate with cultural and heritage institutions in the UAE.

Al Budour explained that the memorandum comes as part of the Ministry’s 2011-2013 strategy to promote national identity, instill patriotism, introduce non-material heritage and raise the level of cultural and social awareness.

He pointed out that the memorandum aims at consolidating partnership between the Ministry of Culture, Youth & Community Development and the Fujairah Crown Prince Award to achieve the strategic goals for both sides through full cooperation that will help them perform their functions in promoting culture and the developing community.

The memorandum is also an embodiment of the spirit of cooperation between the Ministry and the Award considering that we’re all work for a common goal, and are guided by one compass which is the UAE’s Union compass.

Al Budour added that the memorandum of cooperation opens the door for the implementation of activities and joint projects, conferences, seminars and specialized training courses between the Ministry and the Award in the field of culture and heritage.

This cooperation is aimed at strengthening national identity and achieving cultural and social development in the UAE through various means and methods, in addition to cooperation and coordination between the two sides in preparing and presenting programs for the rehabilitation of national human forces. These programs include specialized training programs in the field of culture and heritage between the two parties in relation to the support and development of work in the field of culture and heritage.

The memorandum also included providing initiatives and programs that are proposed by either one of the two parties in all possible means to achieve the goals of the memorandum and the mutual benefit of the appropriate facilities, halls and buildings that both parties have, and benefiting from experts, technicians and specialists in various disciplines in relation with the memorandum, and the preparation and distribution of versions related to the promotion of national identity and cultural and social development to achieve the overall community development.

Cooperation Online and In Marketing

Al Budour added that the two parties agreed on sharing a link of the other party’s website in both their websites and displaying their logos on all shared publications, advertising material and all activities and statements in relation with the memorandum which is valid for five years.

This article has been prepared by Shaikha Al Mesmari, Head of Communications, Fujairah Crown Prince’s Office. The signing took place on 8 December 2011.

Image: H.H. Sheikh Mohammad bin Hamad Al Sharqi, Crown Prince of Fujairah is at the right behind the signatories, standing with H.E. Bilal Al Budour, Assistant Undersecretary for Culture and Art on behalf of the Ministry.

The signatories at the Fujairah Crown Prince’s Office in Fujairah: Musabeh Al Mesmari, Assistant Supervisor of the Crown Prince Award (left) and Abdulla Al Nuaimi, Director of the Coordination and Initiatives Department at the Ministry of Culture, Youth and Community Development (right).