Arab Junior Taekwondo Championship to be Held in Fujairah, UAE 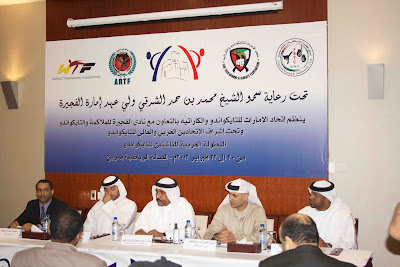 The Organizing Committee of the Arab Junior Taekwondo Championship held a press conference (1 February 2012) to announce the details of the championship to be hosted in Fujairah on 20-22 February 2012.

The Championship is being held under the generous patronage of His Highness, Sheikh Mohammed bin Hamad Al Sharqi, the Crown Prince of Fujairah,

The championship is organized by the UAE Taekwondo and Karate Association, in cooperation with the Fujairah Boxing and Taekwondo Club, which is under the supervision of the Arabic and International Taekwondo Alliances.

Nasser Abdul Razzaq Al Marzouqi, President of the UAE Taekwondo Association, stated that this championship will accomplish a lot of goals, such as contributing to the dissemination of the Taekwondo sport in Fujairah and improving the level of the national taekwondo team through creating opportunities for contact and exchange of technical expertise. One of the hopes is that participants will come to enjoy the tourist attractions of Fujairah and the UAE outside the hours of the competition.

Organizers and participants will be staying at the Concorde Fujairah Hotel.

Al Marzouqi added that the championship will be held at the sports stadium in Mirbeh (Merbeh) and will bring together junior teams aged 14-17 years for young men and women.

The participating countries include Egypt, Jordan, Libya, Morocco, Iraq, Yemen, Kuwait, Palestine, Lebanon, Bahrain, Qatar, UAE, Tunisia and Algeria. Both Saudi Arabia and Sudan send their apologies and will not have any teams participating. No word has been received as yet from Mauritania, Somalia, Oman and Comoros Island.

The UAE is participating in the male and female categories. There will not be UAE women in every weight category because it is the first time the UAE has participated in the junior female categories and there are not the numbers of young women for each weight division.

When asked why Fujairah was chosen as the venue, Al Marzouqi spoke of the policy of his federation to share the various locations in order to strengthen the sport in every region and city. He also said that the Crown Prince of Fujairah had been thoughtfully and practically supportive in every way towards the hosting of the tournament.

Al Marzouqi commended the role of His Highness, Sheikh Mohammed bin Hamad Al Sharqi, the Crown Prince of Fujairah, for his support and generous patronage of many championships and sporting events.

His Highness the Crown Prince of Fujairah has given directives to honor the best Arab male and female taekwondo players who are retired but who have achieved international success.

The Crown Prince also gave directives to honor the best former Arab judge in coordination with the Arab Taekwondo Alliance.

In this tournament for the first time there will be an Honor Prize for the best Arab male and female competitor.

Duaij Al Raissi, Vice President of the UAE Taekwondo and Karate Association said, “The head of the Competition Committee at the International Taekwondo Alliance, Mr. Philip Bodo was invited to evaluate the level of taekwondo in the UAE including the organization of the championship.”

Al Raissi pointed out that there will be an international training seminar for taekwondo referees before the championship from 10-17 February 2012.

Eid Fairuz Al Mesmari, the Championship’s manager, expressed his joy in organizing this championship in the UAE and especially in Fujairah. He thanked His Highness, Sheikh Mohammed bin Hamad Al Sharqi, the Crown Prince of Fujairah, for paying all the costs of the Palestinian participants in the championship and for his constant support of the sport of taekwondo.

First for Daedo at UAE and Arab Champs

Mohammad Ishak, the general coordinator of the championship, stated that this will be the first time in the UAE and Arab Championships where the latest electronic equipment (Daedo) will be used. Daedo is a chest protection gear for the players and it keeps scores electronically. The recapture of scenes will also be used during the matches to help referees.

Download your copy of the timetable for the Taekwondo Championships and related events from this link.

Some pictures taken during the press conference are posted in this photo album.

Keep in Touch With Fujairah