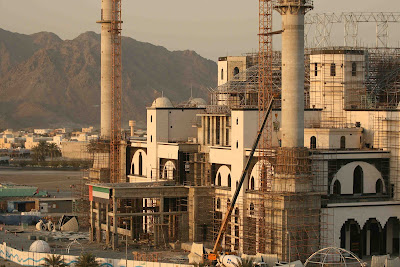 The Sheikh Zayed Mosque being constructed in Fujairah is influenced greatly by the design of Istanbul’s Süleymaniye Mosque in terms of its size, tall and slender minarets, the many domes and spacious courtyard.

The original Süleymaniye Mosque (it was ravaged by fire in 1660) was ordered by Sultan Süleyman who saw himself as a ‘second Solomon’, through his building of such a magnificent place of worship.

At this stage of the construction in Fujairah, although the minarets and domes are incomplete, one can appreciate their style and get a good idea of the mosque’s characteristic features.

Some photos of the mosque taken on 28 February 2012 are posted in this photo album, along with earlier pictures.

Check out the Progress of Fujairah’s New Mosque, FIF, 28 October 2011.

More Fujairah news updates, resources and photos about Fujairah are posted on the Fujairah in Focus Facebook Page.

Image: A photo taken this week (28 February 2012) of the Sheikh Zayed Mosque in Fujairah.