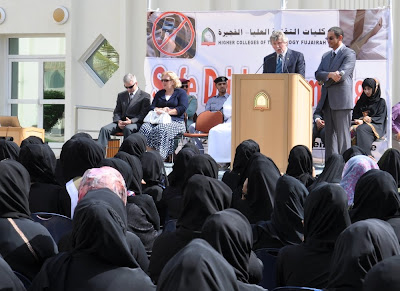 This is the third year in which HCT—Fujairah has run the campaign in response to several student fatalities caused by car accidents during 2008-2009. The week-long campaign offers a multi-faceted program for all Foundation students.

This initiative arose from a Memorandum of Understanding signed between the Higher Colleges of Technology and the Dubai Prosecutor’s Office in 2007 to improve the standard of driving of HCT students and to make them more aware of the legal consequences of poor driving.

Mr. Brian Keenan, Associate Director of HCT—Fujairah (pictured at the lectern), stated in his opening remarks:

“The UAE has a small national population. Too many of our young people are killed or badly injured in road accidents that could be avoided. Safety Week is our commitment to helping our students and their families travel safely on the roads.”

In additional to instructional classes, the Emirates Driving Institute provided a Roll-Over car and the Seat Belt Convincer machine to allow students to experience a roll-over in a car and the effect of sudden braking at 10 kph, both when wearing a seatbelt. 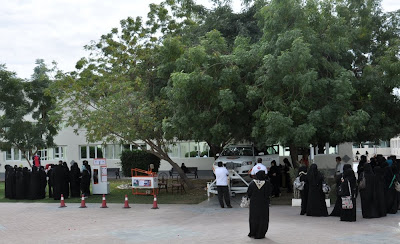 Mr. Ahmed Ameen, Branch Coordinator of the Fujairah National Driving Institute, addressed the crowd of over 500 students, emphasizing the need for serious attention to safe driving in the United Arab Emirates.

Convinced of the seriousness of the issue, Applied Media student, Basma Ali Mohammed Al Mazrouee, addressed the audience by saying: 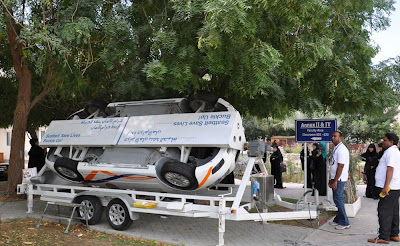 “This is my third year at FWC. During my Foundation year the College held a Safe Driving Campaign for us and brought the roll-over car and the Seat Belt Convincer machine. I tried both of them, and to be honest, at first we tried it for fun but after trying them, we came up with a bit of fear of what could happen if this was real. Please try them and think whenever you are driving your car, you are sitting in the machine.”

Thanks to Fatmah Obaid for sending this article and photographs.