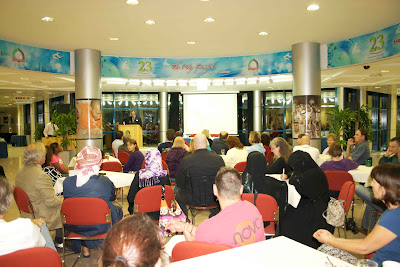 The Emirates Natural History Group—Fujairah (ENHG-F) was launched on the first day of February 2012 with mingling and dringling, the cutting of a cake logoed with an Arabian leopard, a welcome speech by the Director of the HCT—Fujairah and an introduction from Acting President, David Edwards, illustrated by slides of some of the best images of the emirate’s natural history.

Approximately 60 people gathered for the festive launch in the rotunda of the Fujairah Men’s College, which, thanks to the generous provision of the HCT, will serve as the regular venue for the monthly meetings of the new group.

David Edwards paid tribute to His Highness, Sheikh Mohammed bin Hamad Al Sharqi, the Crown Prince of Fujairah, thanking him for his interest in the new group and his willingness to serve as patron.

Edwards stressed the critical importance of local involvement, including his invitation to Sheikh Abdulla bin Suhail Al Sharqi to serve as honorary chair of the new group.

David Edwards stated that the Fujairah group is a chapter of the UAE Emirates Natural History Group, the first chapter of which was established as early as 1976. The ENHG is the oldest NGO that deals in environmental issues in the UAE and as such is “an active and progressive forum for experts and enthusiasts.”

It was fitting that Brien Holmes, former chair of the ENHG-Al Ain, was present at Fujairah’s history-making evening, as he and other members of the ENHG, including Peter Hellyer, Keith Taylor (Abu Dhabi), Gary Feulner (Dubai) and Brigitte Howarth (Al Ain), have already been an enormous resource to the fledgling organizing committee in Fujairah.

About half of the group ventured upstairs to the library for the business part of the evening, in which David Edwards distributed an ENHG-Fuj Membership Form (see download links below) for people to signal their commitment and an ENHG-Fuj Interest Form for people to indicate the topics they are interested in learning about at the regular meetings and places they would like to visit on the field trips.

Sheikh Abdulla bin Suhail Al Sharqi looked around the room and asked, “Where are the local people?” He expressed the hope that Emiratis would be active participants in the new group (including students from Colleges like HCT). He also mentioned that we all have much to learn from older Emiratis who are rich in the knowledge of the traditional customs and the natural history of Fujairah.

Moza Al Kendi, student at the HCT—Fujairah Women’s College and currently doing work experience with the Al Khaleej newspaper, said that many of her family and friends would currently find it difficult to participate in this new group because the communication (at the meetings and publicity) is in English. David Edwards noted these points as major items on the agenda for the next meeting.

Discussion flowed concerning some of the challenges of educating people to refrain from painting graffiti on the rocks at Wadi Wurayah and cutting down acacia trees at Wadi Hayl.

Just as the mood was spiraling down at talk of the inevitably of environmental vandalism, the youngest member at the gathering, Manelle McInroy, took to her feet and said, “There’s enough of us here to help stop this. If we really want to, we can make a difference!”

The gathering received Manelle’s words with hearty applause and the chairman felt that at this positive word (from his daughter), it was an appropriate time to finish the historic meeting.

If you have not filled in a Membership Form (no fees until later in 2012) download your copy at this link and email it to David Edwards: dedwards@hct.ac.ae

Indicate the topics you would like to hear about at the regular monthly meetings and the places you’d like to visit after downloading the Interest Form at this link. Again please email your completed form to David Edwards: dedwards@hct.ac.ae

Some photos taken on the night by several photographers, including Jude Fernando from HCT, are posted in this photo album.

Check out the various pages and resources of the Emirates Natural History Group.

More Fujairah news, resources and photographs are posted on the Fujairah in Focus Facebook Page.

Great write-up of the launch, Geoff. Am confident the residents of Fujairah will realize what an opportunity the ENHG represents in the community -- the opportunity to appreciate the different aspects of natural history in the region. I and others applaud the dedication of David and others to launch the Fujairah chapter and am confident it will be a perfect complement to the chapters in Abu Dhabi, Dubai and Al Ain.