Firm and Clear Rating Standards to be Applied to Fujairah Hotels 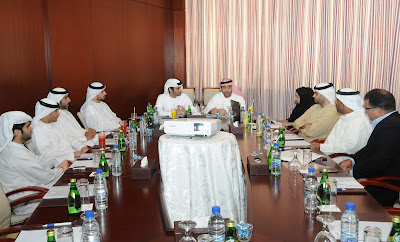 The classification rating (3, 4, 5 stars) of some Fujairah hotels might change as they come under the soon-to-be-accepted standards that are being adopted by the Fujairah Tourism and Antiquities Authority (FTAA).

While some hotel owners will no doubt be disappointed if they lose their current rating, hotel guests will be the ones who benefit from the firmer and clearer standards that are being adopted and enforced by the FTAA.

The new standards will soon be publicized and will form the basis of the regular inspection of hotels that is conducted by the FTAA. Following each inspection, the hotel will be informed of any deficiencies and then given adequate time to address these before their classification is either confirmed or changed.

Yesterday (5 February 2012) the Fujairah Tourism and Antiquities Authority hosted a delegation from Dubai’s Department of Tourism, Commerce and Marketing at the Concorde Fujairah Hotel.

The meeting was arranged in accordance with the policy of exchanging experience and expertise among various agencies and across the emirates of the UAE.

The meeting addressed the Classification Act for hotel facilities in Dubai, outlining the set conditions and standards for different categories and levels (3, 4, 5 stars etc.).

As each emirate has had their different classification standards, the Dubai delegation was asked to comment on the hotel classifications set by the FTAA and how the concepts might be applied practically, in accordance with the size and development of hotel services in Fujairah.

As a way of moving from theory to practice, the visiting delegation and Fujairah hosts treated the Concorde Fujairah Hotel as a ‘pilot’ hotel to establish a benchmark. They inspected the facilities of the Concorde, discussing the essential standards that enable it to be rated as a five-star establishment.

Patrick Antaki recently told the Fujairah Observer (28 January 2012) that the number of hotel rooms in the emirate of Fujairah will increase to an estimated 4.500 units by next year.

He said that Fujairah currently had 2,777 rooms and 698 hotel apartments and the expected room additions are set to increase the number of tourists to a million tourists a year from the current estimate of 750,000.

Image: Members of the Fujairah Tourism and Antiquities Authority hosting a delegation from Dubai’s Department of Tourism, Commerce and Marketing at the Concorde Fujairah Hotel.