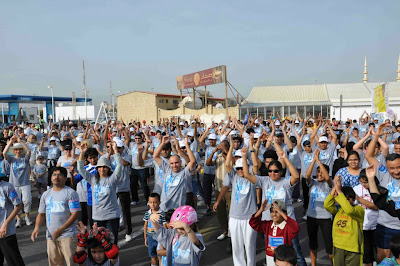 This is a press release issued in Arabic and English by the Organizing Committee of the 2nd Fujairah Terry Fox Run.

Under the patronage of His Highness, Sheikh Mohammed bin Hamad Al Sharqi, the Crown Prince of Fujairah, the Higher Colleges of Technology—Fujairah in collaboration with community partners, organized the second annual Terry Fox Marathon of Hope in Fujairah, UAE.

The event was held on Saturday 25 February 2012. Registration took place online but a registration desk also opened at 7.30am. The run/walk/ride commenced at 9.10am after speeches and warm up exercises to loosen the limbs.

HCT—Fujairah Director, Dr. Dave Pelham, welcomed people to the gathering as well as two special guests who made brief speeches: Kris Panday, the Canadian Consul General from Dubai and Dr. Frank Branicki, of the Faculty of Medicine and Health Sciences at the UAEU in Al Ain.

The Organizing Committee was pleased with the increased participation from volunteer groups and businesses, many of whom donated refreshments for the hungry participants at the finishing line.

Families with children and baby strollers, children and adults with skateboards, rollerblades and bicycles all participated. Children enjoyed having their faces painted and many women had their hands hennaed. The Fujairah Media had arranged lively music to help create a vibrant atmosphere. There was a strong sense of community and a delight in doing something positive about cancer.

This year nearly 700 people participated in the run, which represents a 64% increase over last year’s inaugural event.

Thus far 50,000 AED has been received (individuals and groups may still make their donations), which represents an increase of 68% over last year’s contributions.

Special thanks once again to the Fujairah General Headquarters of Police and the Traffic Department for their wonderful coordination and for ensuring the security of the area and the safety of the people.

Some photos taken by Jovin Job C, IT staff worker at HCT—Fujairah, have been posted in this photo album.

Other news and photos can be found in the Fujairah Terry Fox Run Facebook Page.

Making a Statement of Hope on the Fujairah Terry Fox Run, FIF, 24 February 2012.

Image: Participants limbering up before the run along the Fujairah Corniche. (Photo by Jovin Job C)