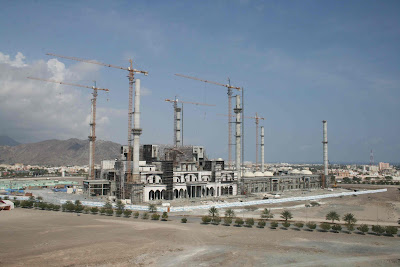 July 2012 is the date declared for the completion of the second largest mosque in the UAE.

It is located behind the main street of the city of Fujairah, at the back of a row of hotels and banks.

The mosque is said to be the size of three football fields, is able to hold 28,000 worshippers, with 13,500 in the main prayer hall.

It is only as one stands near the building that one gets a sense of how grand this mosque is already and how awesome it will be upon completion.

The expansive courtyard will have fountains and palm trees to create a welcoming atmosphere that encourages people to come, linger, enjoy the calm and build relationships.

The new mosque will be a place where all people may attend and in this regard it will be an attraction for fascinated tourists as well as faithful worshippers.

Check out Fujairah’s Sheikh Zayed Mosque on Google Maps. Since this map was created in June 2010 more than 10,000 people have had a bird’s-eye look at the area of the mosque in relation to the city.

The latest photos (1 February 2012) of the Sheikh Zayed Mosque in Fujairah are in this photo album.

Check out the Progress of Fujairah’s New Mosque, FIF, 28 October 2010.

Keep in Touch with Fujairah

More Fujairah news, resources, events and photos are posted on the Fujairah in Focus Facebook Page.