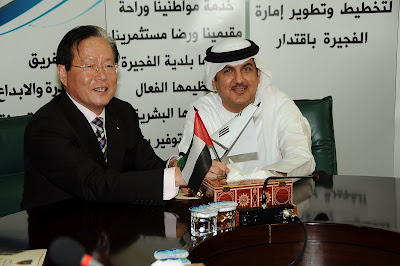 Purpose of the Visit

During the visit from Sunday to Tuesday (19-21 February 2012), discussions will seek to identify potential opportunities for cooperation and exchanging expertise in economic and infrastructure projects.

The Korean delegation will be briefed on recent and current projects in Fujairah as well as hearing about the future plans of the local Municipality.

Mr. Abdulla Al Hantoubi, Deputy Director of the Fujairah Municipality and other Heads of Departments welcomed the Korean delegation to the emirate of Fujairah.

His Excellency, Eng. Al Afkham, expressed his happiness at the visit of the Korean delegation, stating that South Korea is one of the leading countries of the world in a number of fields. He said that the Fujairah Municipality had “managed through careful planning and clear strategies to move steadily toward the accomplishment of the visions of the emirate’s wise leadership.”

Mr. Dongjin Kim, Mayor of Tongyeong, gave a presentation in which he informed staff of the Fujairah Municipality about his city—its location, tourist attractions, nature spots and its industrial and commercial aspects. He said that the area of Tongyeong approximates the emirate of Fujairah with a population of 140,000. Tongyeong is famous for its modern factories, the building and maintenance of ships, fisheries, oyster ranching as well as annual sports and arts events. 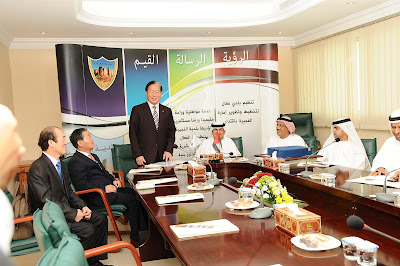 “We thank the Fujairah Municipality for the efforts they have made to welcome our delegation. There is no doubt that the progress and achievements of your municipality are worthy of our admiration and appreciation. We are confident that these discussions will pave the way for the exchange of business, thereby strengthening the close ties that already bind South Korea and the United Arab Emirates.” 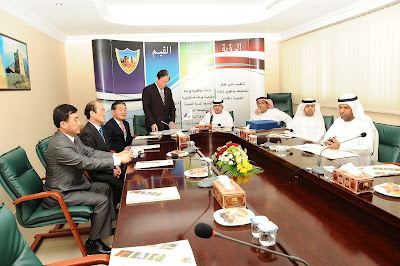 The delegation went on a tour of the Municipality’s departments and sections before exchanging gifts and shields. 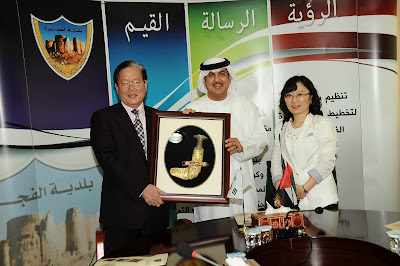 This afternoon the Korean delegation began their tour of Fujairah visiting the Fujairah Fort, the Heritage Village, the Fujairah Museum and the Fish Souk.

Tomorrow (Monday), the team will visit the Fujairah Freezone, meet the leadership of the emirate and see the sights along the northern coast, including the town of Dibba.

On Tuesday, further discussions will take place with groups such as the Chamber of Commerce before the team concludes their Fujairah visit.

More on the Fujairah Municipality

‘Spirit of the Union’ Parade through the Streets of Fujairah, FIF, 17 November 2011.

More Fujairah news, resources, discussion and photos are posted on the Fujairah in Focus Facebook Page.